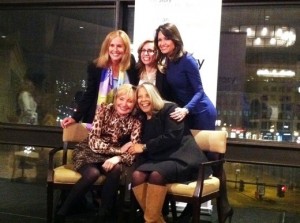 As she sat cross-legged in a leopard print blouse, patterned skirt, and high-heeled ankle boots, Kate White told her audience about a time in her life when she identified less as a “fun, fearless female” and more like a rookie. Before she became editor of Cosmopolitan, a role she held for 14 years, White said she was just as insecure as the many other girls who flock to New York City in pursuit of their dreams.

“I lost a little of my nerve when I got to New York,” she said of her post-college years. “I came across… maybe faking my confidence.”

Last night, about 75 women gathered at the Westin Hotel at Copley Place to hear stories from White, a magazine editing veteran and best-selling author, and Patti Austin, a Grammy-winning entertainer and co-founder of the mentoring-based Over My Shoulder Foundation. Hosted by Boston Women in Media and Entertainment, The Story Behind Her Success was the first in a original series that gives audiences first-hand accounts of rising to the top in various fields. The organization, formed in 2012, holds networking events and actively tries to find jobs for its members, according to Co-Founder and Executive Vice President Dayla Santurri.

“We wanted two ladies who really had great stories, the good stuff and the bad stuff,” said Santurri. “They really knew how to convey them.”

Through White and Austin’s conversations with local media professionals and BWME board members Candy O’Terry and Liz Brunner respectively, the women peppered their professional advice with stories that got laughs from the audience. Austin spoke about the time she wore Crocs to accept her Grammy Award, and Kate revealed that getting Kim Kardashian to pose for a Cosmo cover was unsurprisingly easy. Over two hours, they covered topics like their breakthroughs, their challenges, balancing work and personal life, and career shifts.

White said that despite the advances women have made over the years, there are still improvements to be made.

“I do think that there are some things that women don’t know to do still,” White said after the presentation.

During Austin’s storytelling, she spoke frequently of her mentors including Quincy Jones, Dinah Washington, and Sammy Davis Jr., and emphasized how much their guidance shaped her life and career.

“You’ve got to have someone who just doesn’t care about anything but you,” she said.

In a later interview, Austin said that the United States is lagging in the mentoring mentality.

“The rest of the world gets this,” she said, pointing out that apprenticeships are common in other countries.

“They have a mentor that walks them through that. That’s just kind of a given. I think we really have to stop thinking that we’re doing each other favors to be gracious to each other.”

However, White warned attendees that working professionals aren’t always initially eager to help those starting out.

“Never ever ask someone to be your mentor,” she said. “You just have to quietly adopt them.”

Austin added that she tries to instill this message in her music students.

“[I tell them], ‘Those of you who are doing this to become a star are going to be disappointed.’”

After her sit-down, she spoke about her reaction to an intern who asked her how to avoid being bored at her first job.

“In the old days, they called that paying your dues. You have to know that you might have to do that,” she said.

While both women acknowledged the differences between men and women in the workplace, neither expressed a personal connection with Sheryl Sandberg’s buzzed-about book, Lean In.

“If you lean in too far, you get your head cut off,” Austin joked after the presentation. “You gotta lean in and lean out. It’s like choreography. It’s the choreography of life.”

White said that while she respects the book and thinks that women are inspired by it, she sees the workplace differently.

“The movement seems a little earnest for my taste because [to me], a lot of the work world involves being a little scrappy and getting down and dirty sometimes,” she said.

After the event, Austin said she was happy she saw diversity in the audience.

“What I really loved seeing was that the demographic was really [varied],” she said, emphasizing the range of ages present.

Santurri said that White and Austin were the perfect picks for the kick-off event of the Story Behind Her Success.

“We wanted two people who were pros but also could articulate so women from 18 to 72 could understand,” she said. “I thought it was absolutely fantastic. People had a connection to what they were talking about.”

Austin added that being able to mentor and share her stories makes her a better person.

“Whenever you have that opportunity – and it is an opportunity,” she said, “you grow.”