[box] Everybody loves the Boston Pops Orchestra. Today we are proud to present a story by Justin Locke (a former Pops bassist). Coincidentally, our Over My Shoulder Foundation Co-Founder Patti Austin will perform with the legendary orchestra in just a few days. Get your tickets soon because June 14-16 is a 3-day extravaganza called “Visions of America.” It is a mentor-centric musical performance at Symphony Hall featuring striking photographic portraits of American life by Joseph Sohm, music by Roger Kellaway and lyrics by Alan and Marilyn Bergman. With Keith Lockhart conducting, guest artist Steve Tyrell, and our favorite vocalist Patti Austin – the show will be one to remember for sure!

As you can well imagine, for a young musician, playing in the Boston Pops Orchestra for the first time is a truly unforgettable experience.

I will never forget the first time I stepped onto the stage of Symphony Hall to play my first “big gig.” I was all of nineteen years old.  Next me were two veteran bass players I had never seen before, Frank and Tony.

Tony looked at me for a moment and said, “can I give you some advice?” “Sure,” I said.  I was ever so grateful that these veterans would even acknowledge my presence.  I readied myself to absorb their lofty wisdom.  What would they say?  Some insight as to delicate elements of phrasing?  Perhaps advice on some subtle issue of vibrato?  Or maybe some rare scholarly knowledge as to how to balance equal temperament tuning with the resonance of the upper harmonics?  As I eagerly waited, Tony looked at me and, rather matter-of-factly, said…

This may sound flippant or cynical. But what he was really saying was, “Right now you’re in over your head, so balance your eagerness with humility. Despite the press office hype, all of us here on stage are just mere mortals. Don’t try to impress anybody, you’re here and that’s impressive enough. Silly mistakes make everyone look bad, not just you. Playing ‘no note’ is way better than playing a ‘wrong note.’ So lay low for a while. You’ll get the hang of it eventually.”

As is so often the case with a mentoring situation, this was more than just good advice. I suddenly felt safe and accepted. This infusion of confidence improved my playing instantly (in fact, it is this culture of mutual support and confidence that makes the whole orchestra sound so good).

I went on to play in the Pops for 18 years, but if not for Frank and Tony, I would not have lasted a week.  At Pops, there is no “indoctrination day” for new hires, no pamphlet on how things work. Frank and Tony just took it upon themselves to show me everything, including the best place to buy a used white tuxedo jacket, how to locate and properly pack a bass trunk, and how to order food when on tour in Tokyo. 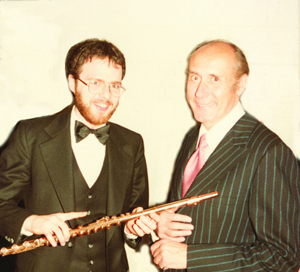 Locke with Henry Mancini in 1981 on Boston Pops tour

When it came to actually playing the music, well, to rise to the next level in life, this requires giving up the pleasant myths and dogmas as you find out how life really works. This sharing of “how it’s really done” is quietly passed from one expert practitioner to another. No classroom in the world teaches certain aspects of performance. You have to be a member of the guild to get certain training. Without connection to a mentor who is willing to bring you along, you’ll never get it.

Just one example, on a Pops tour bus ride I found myself sitting next to Fred Buda. Fred was the Pops’ star set drummer in the Arthur Fielder era. Fred is normally a very quiet person offstage, but on that bus, for that two hours, he was just in the mood to talk, and here was one of the “greats” giving me the lowdown on how he practiced his craft. He shared his personal approach to managing rhythm, and many subtle shadings of emotional color that one can create via simple microscopic variations from the core metronomic beat.

If one lacks the benefit of a mentor relationship, it is common to fill that vacuum with an unbending system of rules. When that happens, you are necessarily  limited by that system, and it far less likely that you will manifest your own unique potential. When Fred explained his approach, he admitted that he was essentially “breaking the rules.”  Once I understood that, I suddenly had that same permission– or you might say, artistic freedom– to break the rules as well.

There is much to know about performing, so much that one can never hope to figure it all out from scratch. Very little of it is written down anywhere.  For example. when I wrote my Pops memoir, “Real Men Don’t Rehearse,” I did a whole chapter on the intricate rules of the “seating” hierarchy of a professional orchestra (e.g., the duties of second chair players, third chair players, and so on). Before publishing it, I decided I should check my facts.  I was amazed to discover that even though this protocol is known and practiced in every single professional orchestra on the planet, I was the first person to ever write it down. For the previous 500 years of orchestra culture, it was learned entirely through mentoring within the culture.

Organizations like the Boston Pops are an unfamiliar kind of entity in our modern world of here today, gone tomorrow. There is an amazing cultural tapestry in place. When I started playing Pops, I was the youngest person on the stage, and I was standing next to some people who had been playing in the orchestra for 60 years or more. The six degrees of separation quickly shrink in such a world. For example, I knew someone who knew someone . . . who knew Brahms. I even knew a guy, who once knew a guy  who knew Beethoven. I once owned a few “78” records of the Boston Symphony from the Koussevitzky era, and one day, standing there next to me on the same stage where those recordings had been made, were two guys who had played on those recordings. It was almost like getting into a time machine.

Of course now there are youngsters who sit around listening to me tell stories of what it was like to work with legends like Arthur Fiedler and Leonard Bernstein. It’s all part of the tribal culture that is the Boston Symphony and Pops.

The culture of the Pops goes back, well, centuries. Every player in that orchestra can tell you their “pedigree,” i.e., how their teacher studied with this famous teacher, who studied with this famous player, in an unbroken chain of mentoring that goes back 300 years to the guy who invented the technique and wrote the beginner method book we are still using today. And most of the string instruments we had were all used hand-me-downs, with their own stories of being owned by a legendary player before it came to you.  (In my case, another mentor gave me my first real Italian instrument to use.) And you know that the day will come when you will have to hand it down to someone else.

Here in the United States we spend a trillion dollars a year putting people into classroom learning environments. This method of learning has its points, but the most effective learning I have ever experienced has always been done on a one-to-one basis, with someone I respected imparting to me, not just the textbook bullet points, but a whole construct of personal connection, perspective, and hard experience.

Justin Locke spent 18 years playing bass with the Boston Pops before becoming an author and speaker. In his books and presentations he talks about the confluence of education, history, and  the performing arts, and how this affects current issues of organizational dynamics and management.

His books include “Real Men Don’t Rehearse” (his humorous Pops memoir) and  “Principles of Applied Stupidity” (or, the benefits of going against conventional wisdom). His upcoming book is titled “The Emotions of Money: Undoing the Effects of Poverty Thinking.”

Justin has been featured on Chronicle HD, CBS Radio, WGBH’s Greater Boston, and in the Boston Globe, and he recently appeared as an “author@google.” Justin’s plays for family orchestra concerts are performed all over the world, and he writes a monthly article of managerial “people skills” for the American Institute of CPAs.  Justin appears regularly as an entertaining and inspirational speaker.