“I think of it often and imagine the scene clearly. Even if they come to kill me, I will tell them what they are trying to do is wrong, that education is our basic right.” —Malala Yousafzai

Malala Yousafzai showed the world that there is no stopping a hungry mind. At 15 years old she proved that she was willing to risk her life in the pursuit of an education. On October 9th, 2012, while riding home from school, Taliban agents stopped her car and shot Malala in the head. She survived the attack, and bravely refused to surrender her dream. Because of her courage and her dedication to the cause of education for all, Malala became the youngest Nobel Peace Prize nominee ever. She has inspired girls around the world to pursue their goals fearlessly and NOT to let anyone get in the way of their education, or their dreams. It shows how one person can inspire change in the world.

I immediately thought of Malala when I heard the story below, written by our dynamic team member Marissa Ranahan. After you read about this uplifting example of mentorship, share the story on social media, encourage your friends and community to support the Malala Fund, and take a few moments to think about how you could make positive change in the world by becoming a mentor.

Dawn Carroll, Over My Shoulder Foundation Co-Founder and Executive Director

“Mentoring someone doesn’t need to be a lifetime job. Sometimes, it can simply be a lesson that can be carried through a lifetime. This story proves that anyone, at any time, can be a mentor in their own way. It’s the little things that have the greatest impact.” —Marissa Ranahan 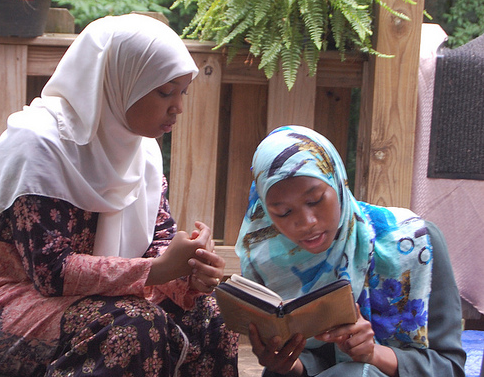 Those were her exact words, and I smiled as soon as she mentioned the word mentor. Since joining the team at Over My Shoulder, it seemed to me that every person I encountered had someone in their life as a mentor.I asked her quickly if she enjoyed reading, and her face lit up. She was twenty-three years old. She had a soft smile, with a brightly colored hijab wrapped tightly around her head. We started to talk about books and different genres of literature. She nodded her head in agreement and smiled as I spoke. “Can I tell you something?” she asked. “I have a mentor who taught me how to read, because I am not allowed to.”

This young woman came to America from the Middle East, where she was never taught how to read. Although she always longed to learn, she was not allowed. When a neighbor in the U.S. found out she wasn’t able to read, the woman offered to give private reading lessons, without the knowledge of her disapproving family. They met every Wednesday night in secret until the young woman’s family came home from work. When everyone was asleep, she would take out her books and practice the sentence structure her neighbor had taught her. After six months of study, she was already reading chapter books.

“To me” she said, “Reading is like a different language. After listening to it, I hungered for more, but I was restricted from reading. I consider my neighbor my mentor, my reading mentor, and a woman who had opened up new doors to my knowledge. To me, this is the best guidance I have ever received.”

The admiration she had for this woman was obvious, even in our brief encounter. I asked her what a “mentor” was in her own words—she responded, “A mentor is someone who comes into your life like a guardian angel, and helps you fulfill a passion that was missing before. It might not be for a lifetime, but as soon as you feel like someone believes in you, that feeling will carry through your lifetime.”

I haven’t seen this young lady again. But the message of her story is universal, and deserves to be heard. Anyone can be a mentor. Small acts of mentorship, like teaching one person to read, reverberate for a lifetime. The reward of helping another person is priceless.