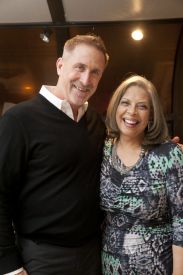 A good mentor is an invaluable resource.

In an effort to break down the barriers that separate generations of people and cultures and raise the awareness of the impact of mentoring, the Over My Shoulder Foundation was born. The organization was founded by Grammy Award winner Patti Austin and songwriter Dawn Carroll, after the two had built a successful mentor-mentee relationship. Patti mentored Dawn early in her music career, and Dawn now mentors Patti as she aspires to become an interior designer.

The two women understand the power of mentorship and the positive effects that it can have on the lives of others. Dawn Carroll, Charlie Farren, Brynn Arens, and Barry Orms wrote the song “Over My Shoulder,” which was performed by Patti Austin and her mentee, Lianna Gutierrez. The song helped to inspire the organization, which was launched to cultivate “mentorology,” the art of mentoring, through entertainment-driven products and events.

The Over My Shoulder Foundation aims to achieve the following:

To learn more about our organization and ways that you can make a difference, please contact us today!