Grammy winner Patti Austin crosses all musical genres, has made 17 solo albums, and has performed her award-nominated hit songs on the GRAMMYS® and the Oscars. As a performer, songwriter and vocalist she has had a star-studded career that began at the age of four, making her one of the most beloved artists the world over and a mainstay on the Billboard Jazz Albums charts. She is Patti Austin, whose extraordinary career continues to cross over boundaries and reach new heights. Because of how important mentoring has been to Patti throughout her life, she co-founded Over My Shoulder Foundation. Patti attributes much of her musical success to her mentors most notably the close guidance of her godparents Quincy Jones and Dinah Washington. Patti Austin is currently being mentored by Boston’s prestigious design community with Dawn’s expertise as her guiding light as she realizes one of her dreams of becoming an interior designer.

Dawn Carroll has dedicated a large part of the past 4 years to starting Over My Shoulder Foundation (OMSF) and promoting the idea of Mentorology – the art and science of mentoring. In fact, her passion for Designing the Next Generation has driven Dawn to draw on all her resources to create the dynamic media-driven non-profit organization that exists to further the concept and application of mentoring. Dawn has carved out OMSF’s niche in the mentoring world while managing an award worthy design career at CUMAR Marble & Granite which is currently in its 8th generation of leadership in stone sourcing and fabrication in Everett, MA. Dawn writes, “What do you see that I can be” when considering the similarities of an empty room and an individual who needs a mentor in her article about “Designing the Next Generation“.

OMSF Accomplishments keep Mentorology, the art and science of mentoring, as the number-one priority. As OMSF grows as a non-profit organization they will keep producing live events which bring together industry leaders in order to pay tribute to great mentors and put the spotlight on the importance of mentoring.

For more information abut Over My Shoulder Foundation, visit overmyshoulderfoundation.org or contact Dawn Carroll, Co-Founder and Executive Director, by calling (617) 510-2620 or emailing carrollco2@comcast.net. 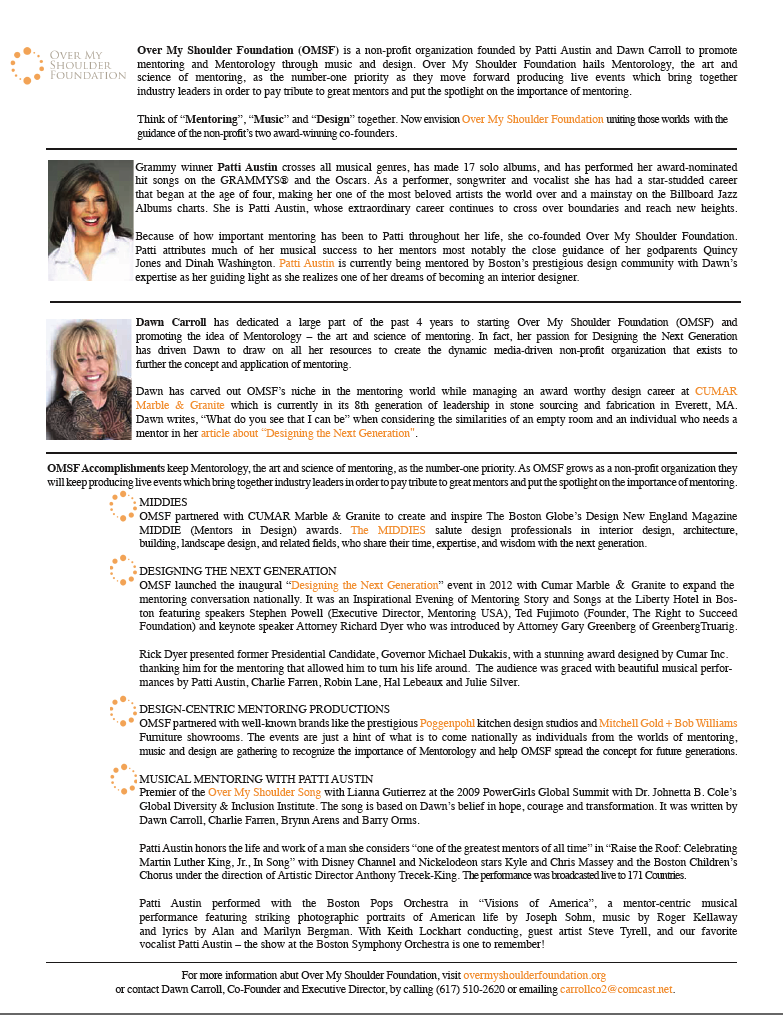