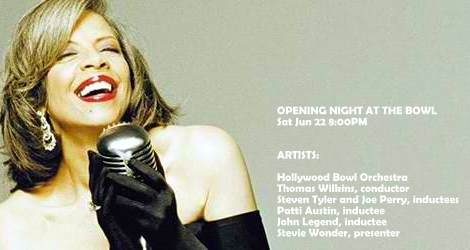 Grammy Award winner Patti Austin is being inducted into the Hollywood Bowl Hall of Fame along with three other artists—John Legend, Steve Tyler and Joe Perry—in a benefit concert to be held on June 22, 2013 at the Hollywood Bowl in Los Angeles, California. The 14th Annual Hall of Fame Concert will benefit the LA Philharmonic’s Education Research Program. It commences in June and will feature the four inductees performing with the Hollywood Bowl Orchestra under the baton of conductor Thomas Wilkin. Tickets are available here.

The Hollywood Bowl is the largest outdoor amphitheater in the United States and is located right in the heart of LA’s Hollywood, California. It has been the venue for many of the world’s finest performances since its inception in 1922. Each year organizers fete musical legends by featuring them in a concert ushering in a new season and inducting the performing artists into the Hall of Fame.

The program will highlight Ms. Austin’s career, from starting her singing career at the age of four to becoming a philanthropist through her Blue Movement (a cause to end domestic violence against women, children and men) and Over My Shoulder Foundation ‘OMSF’ (a non-profit organization that promotes mentoring through music and design).

Ms. Austin personifies the mission of OMSF — to break down cultural and age barriers to facilitate self-empowerment and transference of knowledge between the disciplines of music and design — as she herself has benefited from mentoring and, in return, has mentored younger artists in various ways. Ms. Austin calls this “Mentorology” — a term she and co-founder Dawn Carroll coined to describe the OMSF mission. Among Ms. Austin’s distinguished mentors are notable legends Quincy Jones and Dinah Washington.

This year’s Hollywood Bowl Hall of Fame Concert is being organized by producers Wayne Baruch and Charles F. Gayton, whose attention was caught by the music video of Over My Shoulder. The song Over My Shoulder was written by Dawn Carroll, Charlie Farren, Brynn Arens and Barry Orms.

About Patti Austin
Grammy winner Patti Austin crosses all musical genres, has made 17 solo albums, and has performed her award-nominated hit songs on the GRAMMYS® and the Oscars. As a performer, songwriter and vocalist she has had a star-studded career that began at the age of four, making her one of the most beloved artists the world over and a mainstay on the Billboard Jazz Albums charts. Patti’s extraordinary career continues to cross over boundaries and reach new heights.

About Over My Shoulder Foundation
The Over My Shoulder Foundation is a non-profit organization founded by Patti Austin and Dawn Carroll to promote mentoring and Mentorology through music and design. OMSF hails Mentorology, the art and science of mentoring, as the number-one priority as they move forward producing live events which bring together industry leaders in order to pay tribute to great mentors and put the spotlight on the importance of mentoring. OMSF started with a song called “Over My Shoulder,” as a duet performed by legendary Patti Austin and one of her mentees, Lianna Gutierrez.