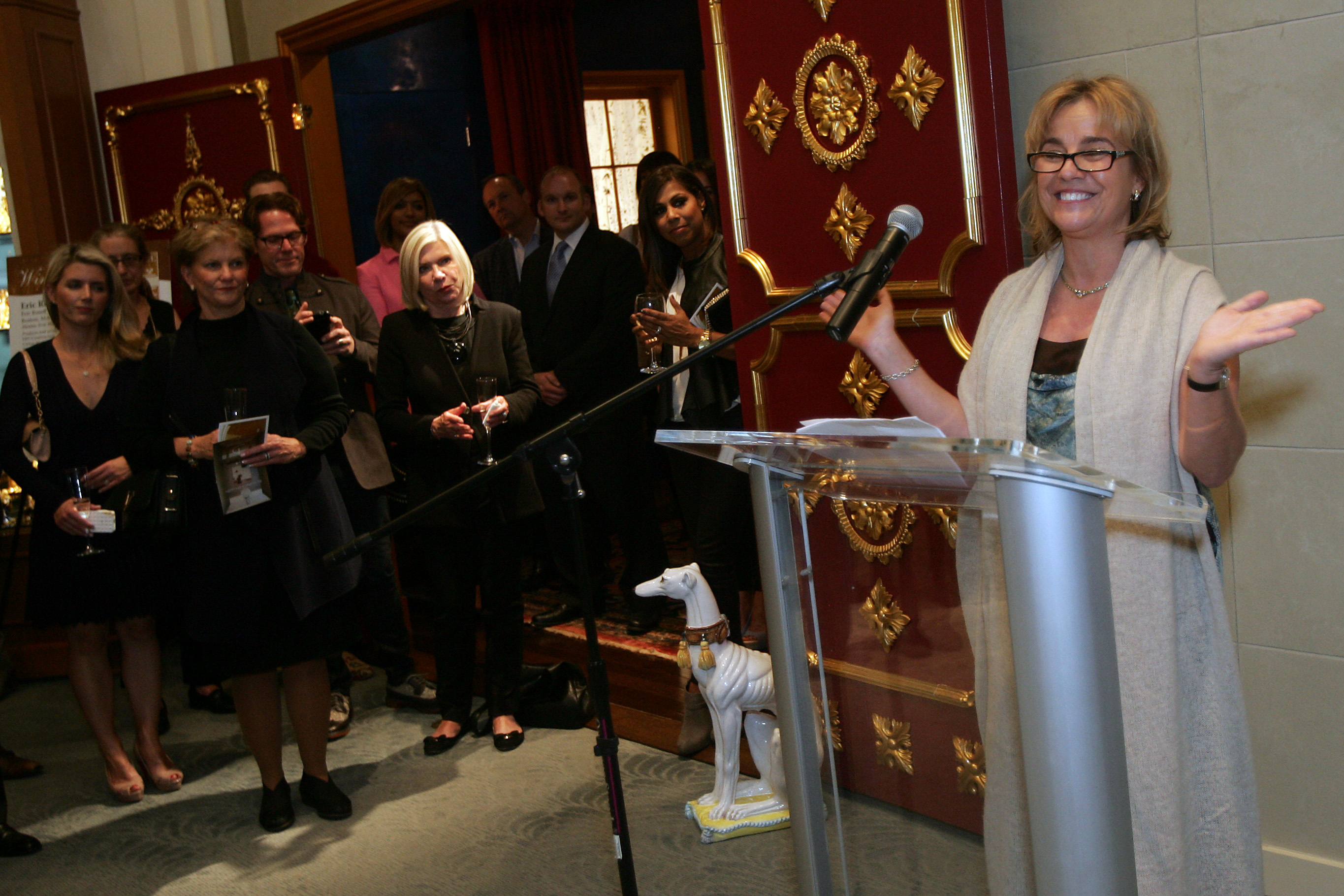 “I never thought in a million years that our little gift gallery could be transformed into three amazing royal residences,” said Daniel Kramer, Vice President and General Manager of Neiman Marcus Boston, in his opening remarks. New England Home publisher Kathy Bush-Dutton spoke next, echoing Kramer’s sentiment and crediting the three designers and their teams.

Tony Fusco, co-producer of “Home for the Holidays,” announced the schedule for Boston Design Week 2015, which takes place March 19–29 in Boston. He then put the spotlight squarely on OMSF Executive Director Dawn Carroll, who took the microphone to emphasize the vital importance of mentorship in the world of design and in this exhibit especially.

“There’s no school for stone design,” Carroll said. “That’s why mentorship is so important to Cumar, and that was part of the reason I founded the Over My Shoulder Foundation. In mentorship, we act as good stewards for our industry and our society.”

To produce “Home for the Holidays,” three Boston designers were invited to re-imagine famous royal palaces, and each were asked to allow a mentee to contribute significantly to the vision and project.

The Versailles room, designed by Paula Daher and mentee Virginia Seherr-Thoss, offers the classic gold trim in perfect balance with the decidedly modern furniture. The finishing touch? A pair of Christmas trees that sparkle with silver and gold ornaments.

In the Winter Palace, Eric Roseff and mentee Evie Hickey dazzle with deep blue walls, a mélange of richly-textured furniture—including green leather chairs and a lush blue sofa-in-the-round—as well as faux windows that face an array of mesmerizing portraits.

“Home for the Holidays” can be visited in the home section of the Neiman Marcus store in Copley Place, Boston. The event will close in January 2015 with a mentoring gala sponsored by Cumar and the Over My Shoulder Foundation. 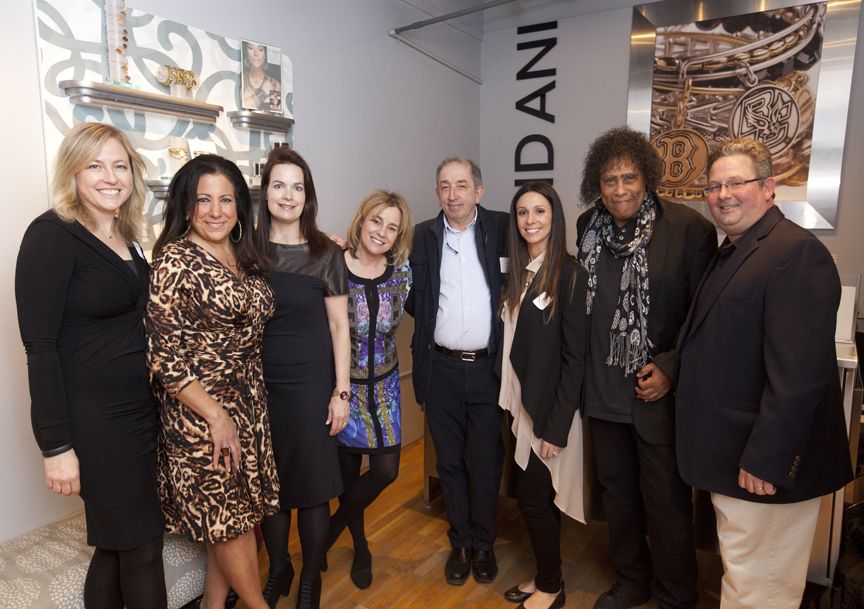 On Monday, March 24, the Over My Shoulder Foundation (OMSF) partnered with Cumar, purveyors of fine marble and granite, to present Charmed by Charity: Mentoring in the Music, Design and Fashion Industries.

The event was held at the Alex & Ani outpost on Boston’s trendy Newbury Street, and featured a mix of local celebrities, media, and mentoring supporters. Guests were treated to light fare and copious attention from the Alex & Ani staff, who were on hand to help customers choose from an array of beautiful bangles and bracelets.

Headquartered in Cranston, Rhode Island, Alex & Ani is known for their collection of meaningful jewelry that “adorn the body, enlighten the mind, and empower the spirit.” 15% of proceeds from the evening’s sales were donated directly to the Over My Shoulder Foundation; guests who purchased $100 or more in merchandise were treated to The Path of Life, a book of testimonies by Alex & Ani customers, who share the ways the positively-focused jewelry changed their lives for the better.

Janice O’Leary, health and wellness editor of the global luxury publication Robb Report, formerly editor-in-chief of Boston Common magazine, was the event’s emcee, which kicked off with a welcome from Dave Connor, CUMAR general manager and OMSF board member. Guests were also treated to a song put together especially for the event: “The Path of Life” was co-written by Grammy-nominated Boston rocker Jon Butcher and OMSF Executive Director Dawn Carroll, and was inspired by the Alex & Ani book of the same title.

After that, Amanda Frederick, assistant manager of Alex and Ani’s Boston location, discussed Charity by Design. Cumar’s executive vice president, Carlotta Cubi, and Paula Daher, principal of Paula Daher Design, talked about the importance of mentoring in the stone and interior design industries, respectively. Then stylista Denise Hajjar, of the eponymous boutique, shared her insights from the fashion industry.

Before she took the mic, Paula Daher mentioned just how important mentoring has been to her as her career’s progressed. “It took me awhile to find [a mentor],” she said, “And in fact, I never thought I would. It’s men who tend to hold positions at the pinnacle level.” In response, she says that she feels even more compelled to mentor—in particular, women—now that she’s established herself.

Janice Dowling, another area designer and instructor at Boston Architectural College, agreed, and added that, “It doesn’t matter how far along in your career you are, or how old you are. There’s always something to learn. Be a sponge. Ask questions. Be curious.” Which just goes to show: mentors are needed at every stage of life.

Karyn Polewaczyk is a freelance writer living in Boston and a staff reporter on personal finance for the Boston Globe.

[box]Recently, I was invited to write a guest post for the blog of Alex & Ani, a company that “offers eco-friendly, positive energy products that adorn the body, enlighten the mind, and empower the spirit.” It was thrilling to be able to highlight the importance of mentorship for their community. Here is the complete text of the post, which you can also find at the Alex & Ani website. 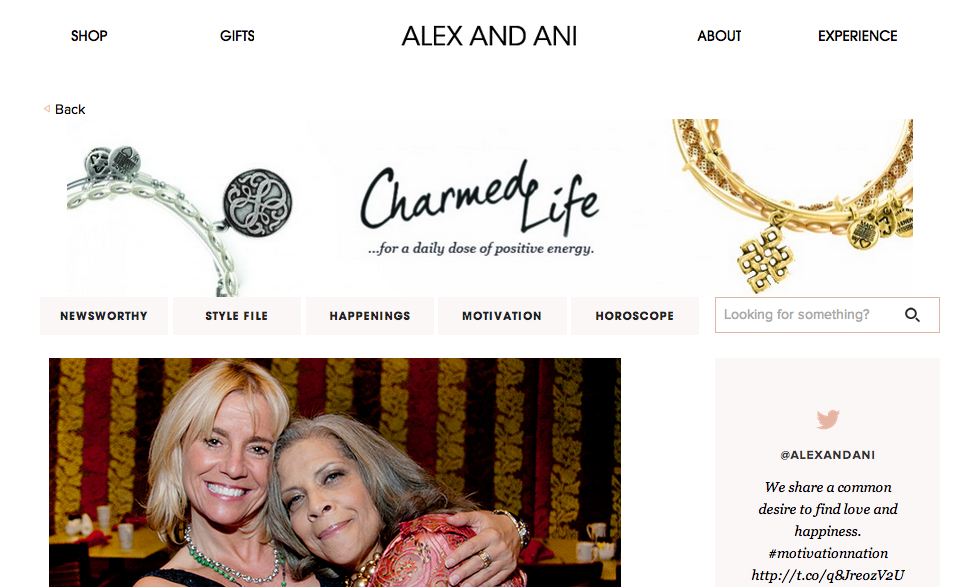 A few years ago I was asked to help write a song for a very talented thirteen year old to sing with her mentor, singing legend Patti Austin. The challenge was to find subject matter that was both appropriate and authentic, something teenagers and adults could relate to. I was given a musical formula by the managers: take a base of Taylor Swift, blend it with Adele, and decorate it with some Carly Simon – with that, I was supposed to cook up a delicious song with multi-generational appeal.

Initially, I laughed about the assignment. It was like being asked to write the spell that turns lead into gold. I said to myself, “If I can write that story/song, I could retire tomorrow!” However, I enjoy a daunting task and attacked it with relish. At the time I happened to be with my niece, Meghan, so I asked her to help me. Together, we came up with many ideas in just a few hours, but there was one idea that kept me up that night.

When I was trying to make it big in Hollywood, I was working for a music management company. They represented, among others, New Kids on the Block (hey, they were pretty big at the time!) as well as singing legend Patti Austin. One time, Patti was asked to describe the recipe of her own success. She simply replied, “Mentors.”

That word kept coming back to me as I was working on this new song. I have jokingly told people that it only took 15 minutes to write a duet for Patti to sing with this young lady, but truth be told, the song had been marinating inside me for more than two decades. That’s how I came to write “Over My Shoulder.” The message of the song is simple: two voices, two generations, each one inspired by, supportive of, and paying tribute to the other.

This was the very first song I ever wrote, and at 48 years old, it was also a lifelong dream come true. The song was a hit! It initiated vibrant conversations amongst powerful leaders both young and old, and something stirred inside me as well. Jimi Hendrix, my musical hero, once said, “If there is something to be changed in the world, it can only be done through music.” I felt that I could create music, tell stories and produce events that could spotlight mentorship, to promote positive change in the world by encouraging people to care for each other.

I believe that there is nothing more dangerous than hopelessness. Mentoring is our most powerful weapon in the fight against it as well as poverty, ignorance, and hatred. We all need to become life-navigators and be open to them. It is up to all of us to design the next generation, to instill hope into the future. Without it, we become disconnected as individuals and lost as a society.

The Alex and Ani story is a perfect example of the power of mentorship. Like many of you, I gravitated to its positive energy and ethos of continuity, “inspired by the wisdom of ancient thinkers,” as the company’s biography reads. I discovered that Carolyn Rafaelian, Founder and Creative Director, created Alex and Ani to carry her family’s legacy forward, to fulfill the vision of her father. She did this not only for its own sake (and all of ours!), but for her daughters’ as well.

The Alex and Ani mission is mentorship writ large: history and values being passed across three generations and likely more to come. Mentoring truly is a life force without which none of us can thrive. It helps the next generation take over and succeed. It allows the spiritual side of passion to flourish and let a living history be passed on.

I cofounded the Over My Shoulder Foundation to shed light on these important examples of mentorship in music, design, and elsewhere. As Executive Director of OMSF, having collected dozens of stories like this, I have come to learn how important mentoring is to people. It spans across age, class and race, defying innumerable social divisions. Mentoring is a healing and hopeful force that reconnects the disconnected. Mentoring stimulates creative thinking, and it will be creative minds that will move us all toward a society of greater inclusion, integrity and value.

[box] Patti Austin, Over My Shoulder Foundation co-founder and Grammy Award winning singing legend, reflects on her design mentors. Look out, she’s going to get awards for her design work pretty soon![/box]

I couldn’t say goodbye to 2012 without reflecting on all my magical DESIGN mentors in Boston who graciously shared their time, wisdom and expertise and helped mentor me as I pursued learning more about my passion of Interior Design.

Lastly, I would like to thank my friend and Over My Shoulder co-founder Dawn Carroll and her company Cumar Marble & Granite for mentoring me!

January is National Mentoring Month… Who mentored you? Who is your navigator? Go to Over My Shoulder Foundation or visit our Facebook page and tell us your story!