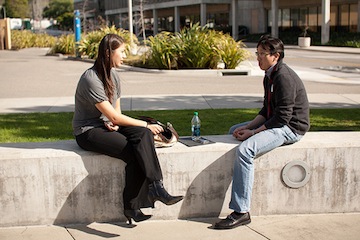 It’s important to remember that both sides of the mentorship have knowledge to impart to the other.

At the Over My Shoulder Foundation, we spend a lot of time talking about the powerful impact that a mentoring relationship can have, both cross-generationally and cross-culturally. Often when people think of a mentor/mentee relationship, they think that the mentee is the primary beneficiary of the relationship as he or she is learning new skills and knowledge from his or her elder, the mentor. However, it’s no surprise that the younger generation also has a lot of useful experiences and skill sets to pass along to the older generation. This increasingly popular concept is known as reverse mentoring.

This unique concept was most famously introduced to Corporate America more than a decade ago by former General Electric Chairman Jack Welch, and it has continued to gain momentum as advances in technology have  further widened the gap between generations. For example, a business owner in his 50’s knows that he needs to have an active presence on social media, so he partners with a 20-something to help him learn the skills for more effective marketing.

To learn more about reverse mentoring and how you can benefit from such a relationship, please contact us at the Over My Shoulder Foundation.