[box]I get so excited when I discover a unique mentoring story, whether it’s in the form of a book, song, show or film. Today OMSF is thrilled to feature Kay Goldstein, author of Star Child. It’s a fabulous adult/YA book that takes us on a journey of Terra and Marius—two star children trying to fit in. It’s a story is about confidence and loneliness, fears and obsessions.

January is National Mentoring Month so we are particularly glad to have this tale, which uses mentoring to counter the alienation and negative feelings that diminish the possibility of hope. We all need more hope, and we all need a mentor. I’d like to thank Kay for taking the time to write this piece for the OMSF blog, and I hope you’ll buy a copy of her book! 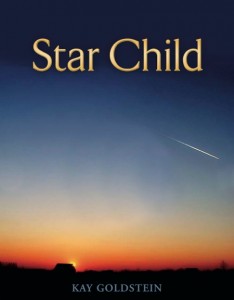 As we begin the New Year and many of us think about making resolutions, I am reminded that all of us can use a little help achieving our goals. And one thing I learned from writing Star Child is that there is only one resolution that we really need: to be true to our selves. For if we know who we are and can nurture the very best and most unique parts of ourselves, then we will find a great satisfaction in our lives, our relationships, and our work. Any resolution that is not based in this truth is bound to fail, especially if it is designed just to please others.

The story of the star children offers inspiration as well as examples of how to get through difficult times, and how to realize one’s unique self. Both children recognized that they were different from the others. Both felt the pain of their “differentness,” even though they had caring adults and family around them. In fact, they were often pressured and even bullied to conform to the “norm.”

But each found a mentor who provided some special guidance. For Terra, it was the Ancient Mother; for Marius, it was the Baker: both appeared just when the characters most needed guidance. While different in their approaches and support, each provided similar assistance:

As the author of this story, I felt those characters help me understand how to write a book that was true to my own voice and self. When faced with the task of editing the final version of the story, I often imagined what the Ancient Mother or the Baker or even Terra might want to do or say. They ended up being my mentors too. It was only when the book was published that I realized that I was learning, at a much older age, many of the same lessons that Terra and Marius had learned.

January is National Mentoring Month. If you seek support, guidance, and good examples—no matter what your age—then seek out a mentor! You’d be surprised: they sometimes appear only once you have decided you need one. And consider offering your own gifts and skills to those around you. Everyone will benefit!

[box] About the Author

Kay Goldstein is the author of Star Child (Vineyard Stories), a spiritual fairy tale for adults and young adults and recipient of a 2013 Nautilus Book Award, as well as A Book Of Feasts, Stories and Recipes from American Celebrations, a James Beard Award nominee. Kay was formerly an editor for Zagat Restaurant Guides and founder of award-winning Proof of the Pudding, Atlanta’s first gourmet takeout store/restaurant and catering business offering innovative American and fusion foods. She is married to Buck Goldstein and has two grown children, dividing her time between Chapel Hill, NC, and Martha’s Vineyard, MA.[/box]