[box]So far, 2014 has been an exciting year for the Over My Shoulder Foundation. We discovered some amazing people who have agreed to share a little of their wisdom. We have stumbled upon dynamic examples of how easy mentoring can be—and seen how quickly you can change a life. A few weeks ago OMSF writer Larry Katz snagged an interview with Stanley Roberts, the reporter who reunited international music star Carlos Santana with his homeless former band mate. That story gets bigger every day (watch parts 1, 2, and 3). Last week, I got the opportunity to write a story for the amazing jewelry company, Alex and Ani, whose fantastic mantra is “Inspired by the Wisdom of Ancient Thinkers.”

Today we have an interview with Kim Taylor, who was recently appointed to serve as a member of the President’s Committee on the Arts and the Humanities alongside Sarah Jessica Parker, Forest Whitaker, Anna Wintour, Yo-Yo Ma, Jhumpa Lahiri, Kerry Washington, and Secretary of State John Kerry’s wife, Teresa Heinz.

We hope you’ll be inspired by these stories. Mentoring is a life-force we cannot live without. These positive influences in our lives stop us from becoming disconnected as individuals and as a society. So, in the words of President Barack Obama: “Be the change. Mentor a child.” [/box] 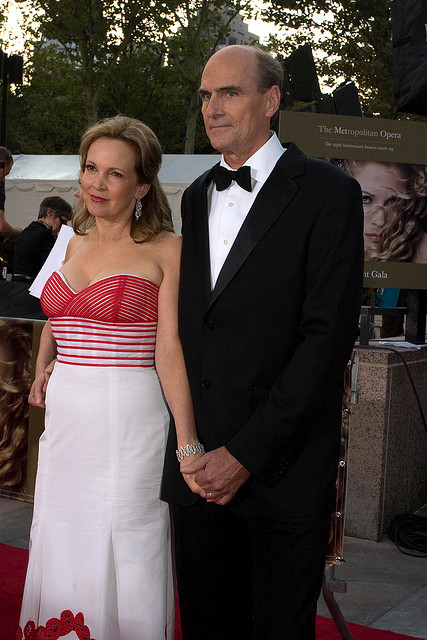 Kim Taylor received a most unexpected phone call last spring. It came from the White House. And, no, they weren’t trying to reach her rather well-known husband, musician James Taylor.

They were calling to ask her to serve as a member of the President’s Committee on the Arts and the Humanities alongside the likes of Sarah Jessica Parker, Forest Whitaker, Anna Wintour, Yo-Yo Ma, Jhumpa Lahiri, Kerry Washington and Secretary of State John Kerry’s wife, Teresa Heinz.

“It really was a surprise,” Taylor said from her home in the Berkshires. “It was out of the blue. Of course I said yes.”

Taylor expects her new position will offer opportunities to promote arts educations in schools across the United States, a mission, she says, “that’s very near and dear to my heart from all my years at the BSO.” Her relationship with the Boston Symphony Orchestra began 30 years ago, when Taylor worked in the orchestra’s publicity office, and continues today as a trustee and board member.

Taylor still isn’t sure what she will be asked to do as a member of the President’s Committee. She missed her first meeting, but she had an impeccable excuse.

“It was just so frustrating that the meeting was on November 22,” she explained, “the one day James and I had committed to being in Boston to perform at the Kennedy Library. It was a hard decision.”

On that day the Taylors performed at a ceremony marking the 50th anniversary of the assassination of President John F. Kennedy. As she has done for some fifteen years now, Kim added background harmonies to James’s performance. “We sang ‘Close Your Eyes,’ that beautiful lullaby, which we did as a duet, just the two of us.”

Does Taylor, who married in 2001, consider her husband her mentor as a singer?

“Yes,” she said laughing, “without question. I’ve been singing for as long as I can remember, but basically I was classically trained and it is very different to get up and sing in an arena with thousands of people.

“I grew up in a very musical family. My grandmother, who was born in 1891, was a trained opera singer. Her name was Portia Fitzsimons. She was a huge influence on me. She had a beautiful voice. She gave up her career when she had my mother, who also had an incredible voice, but never pursued her career, to have me. I just wish they were still here to see me. Not that I have a great singing career, I don’t mean to imply that. But I’ve been really lucky to be able to experience that. It’s such a wonderful outlet.

“I used to sing in the glee club and school choruses. After I went to work with the BSO, the highpoint of the year for me was if I could sing with the Tanglewood Festival Chorus at Christmas Pops. In fact, I just sang with them last week with Keith Lockhart. It’s the greatest thrill to be onstage with that chorus and that orchestra. So much fun.”

How did she make the jump from singing in a large chorus to performing on tour with James Taylor, one of the preeminent singer/songwriters of our time?

“We started very slowly. James heard me singing around the house or something. Then he was in the studio in New York with Russ Titelman, his producer, and he asked me if I could sing a harmony so he could just hear how it sounded. He tricked me! He didn’t tell me he wanted to use it or I probably would have been really nervous. When Russ said they were going to use it I said, ‘No way, that’s crazy!  Let me re-do it.’ But Russ said, ‘No, it’s great.’

“From there it just evolved. It started with James saying, ‘Why don’t you sing the encore?’—‘Shower the People’ or ‘How Sweet It Is.’ And it was so much fun working with his backup singers, Kate Markowitz and Arnold McCuller. They were so patient. It taught me so much.”

In recent years Taylor has rediscovered another artistic passion: acting.

“I’ve always loved it,” she said. “I acted as a child, in high school, and some in college. It’s something that’s been with me for a long time. But in my years at the BSO I didn’t really have the time to audition. Now my life is different. About four years ago I was able to audition for ‘A Christmas Carol’ at the Berkshire Theatre Festival. I went mainly because our children—we have twin boys—they were eight then and they wanted to do it. They were auditioning for Tiny Tim and the young Ebenezer Scrooge.

“Much to my surprise the director asked me to read for Mrs. Cratchit. I was not expecting to audition. I had to do a Cockney accent on the spot. You know the Alastair Sim’s (1951 film) version? I tried to conjure that and much to my surprise, and terror, I was cast as Mrs. Cratchit. And there were 22 shows that year at the Unicorn Theatre in Stockbridge. The next year we moved to the Colonial Theatre in Pittsfield, which is a beautiful facility, and because it has a greater capacity we could do fewer shows.

“Then the artistic director, Kate McGuire, asked if I wanted to audition for this piece based on one of Edith Wharton’s short stories, ‘Roman Fever.’ We performed that this fall as part of this fall festival in the Berkshires. It was directed by Keira Naughton, the daughter of the actor James Naughton. She was fantastic to work with.”

Taylor did not hesitate when asked if she had an acting mentor in her life.

“Yes. Absolutely. I went to the Albany Academy for Girls. I had an incredible theatre teacher there, Margery Van Aernum. I studied with her from when I was nine to 17. I think it’s a very hard age to work with kids. I think like most kids that age it was difficult to get me to focus. But she treated us like professionals. Like adults. She had very high expectations.”

Without doubt Taylor will bring an unusual combination of experience and perspective to the President’s Committee on the Arts and the Humanities, whatever her role.

“I’d love to tell you more about it when I find out more about what I’ll be doing,” she said.

And we will look forward to hearing about it.

About the author
Former Boston Herald columnist and editor Larry Katz has covered music and the arts for more than 30 years. Visit his website, thekatztapes.com. Contact him at larry@thekatztapes.com.