[box]Today’s mentoring story is brought to you by Madge Woods, the board president for the Action Committee for Women in Prison. That committee advocates for the humane and compassionate treatment of all incarcerated women, collaborates with other organizations dedicated to reforming the criminal justice system, works for the release of individual women prisoners who pose no danger to society, informs and educates the public and promotes a shift of focus from punishment to rehabilitation and restorative justice. We KNOW that mentoring after prison transforms lives, as demonstrated by the mentoring story of Attorney Rick Dyer.

Through this mentoring story, Madge has proven that a thoughtful, caring mentor WILL improve the lives of others AND reduce recidivism, which is a person repeating an undesirable behavior after they have either experienced negative consequences of that behavior. Mentoring after prison isn’t something that we normally think about, but give it a thought today!

I met her on parole, and now she’s AMAZING.

Keisha is my mentee, technically really not anymore as she finished parole April 29, 2011, 5 years from almost the day I met her.

Keisha has become so much more than what she was the day I met her. She had trouble making choices about everything (no choices in prison). She was more like the teenager she was when imprisoned at age 15 1/2 than the 32 year old woman standing in front of me.

Having been one of the first juveniles tried as an adult in California she was sentenced to life plus 9. I never did understand this sentencing. When I first met Keisha, after she was out a month, we went to lunch with a program that we both signed up for, Volunteers in Parole (which is now de-funded). She was nervous and didn’t know how this would all work. But by the end of the lunch we were matched and the bond started.

For 5 years we hung out. We went to museums, plays, shopping, lunches, dinners. Mostly we spent time just talking, in person and on the phone. We are very different. Our lives couldn’t have been farther from each other but somehow we waded through. I talked and asked questions and sometimes she answered me and sometimes she had no trust that she could tell me what she needed to say. But with time and work and energy we started to be friends rather than mentor/mentee. I guess this is proof of the Mentorology cycle at work!

Keisha’s life after prison started back where SHE started. Living with her disabled Mom immediately put Keisha back in the position of daughter, only now she was taking care of her mother. We talked about her roles in life, her roles in her family and her dreams for her future, which needed a job to get going.

Keisha got a job right away and it took a while to find the right fit. A few jobs later she settled in and at the same time started thinking about helping those lifers still in prison and those outside. She joined groups and started speaking out on her story. She spoke on stage and with friends and among total strangers. She started to become the adult she searched for.

After mastering driving and cooking and making a place for herself within her Mom’s home, Keisha flourished. She dreamed of the day she was off parole so she could move to her own place and start the life she so deserved and worked so hard to attain. Now, 5 years later, she is reaching all her goals. If she had buried a list when going to prison, I think she would feel she is moving farther away from that 15 year old and more to who she believes she can be and checking off items on that list.

From that first day, I cared about Keisha. I tried to introduce concepts that she had never learned or seen in her family-saving, checking accounts, credit cards, and insurance. She thrived and started saving for emergencies and for her future. Did she always make the best choices? No, but she made choices and accepted consequences and grew from each encounter.

She  had her tattoos removed from Homeboys and became active in prison reform. She started talking and couldn’t stop. She turned her life around. She took advantage of every possible program in prison, she graduated high school, she represented the women in prison less educated than she and helped with rules, regulations and programs in prison. She even went to Toastmasters and became a great speaker. We worked on some language and pronunciation and she continued to write and publish and perform. She became a tax payer, she now can vote and most importantly she broke the family cycle that had led her to crime to begin with.

I have full faith Keisha will never offend again and will not ever put herself in a position where her character could be questioned. Keisha is a success at solving problems and resolving issues. I can honestly say I have learned more from Keisha than she could have possibly learned from me. She became part of my family. She shared my joys and struggles. I have a lifelong friend that I love like my own family. I am so proud of Keisha and I just wanted the world to know it.

A Life Completely Transformed through Mentorology

It is now over 7 years since Keisha was released. She has her own place and is moving soon to be with her Mom in their own place. She has a wonderful job with a big global shipping company and has passed all their requirements with a 100% accuracy. She is going from a temporary employee to full-time and is respected by all her co-workers. She has continued to speak out and help teens and pre-gang groups to see if her lessons can be shared and prevent violence among youth in trouble. Keisha also is in a wonderful relationship with someone who respects her and is a good partner. But most important Keisha introduced me to her life, her friends and I am now involved with the Action Committee for Women in Prison as their board president. Also, when another of her friend got released Keisha encouraged her friend to select me as her mentor. That relationship also has been very successful as well for over 6 years. I love my friendships with these two women and am so proud of them. I truly feel they are my sisters and we share so many great conversations and adventures. 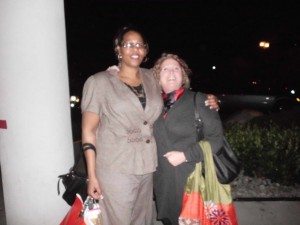 Mentoring works. I live it and breathe it everyday. It has totally changed me and showed me how young, bright women can get caught up in making bad choices but with friendship, time and energy can change and become a remarkable citizen of this country.