I first reached out to Ayla about being interviewed for OMSF when she was performing with our co-founder Patti Austin and the Boston Pops. A young singer that had just been introduced to Over My Shoulder Foundation ( 7 year old) Carly Connor was on her way to meet Patti and I thought, how cool it would be to have this young singer interview them.

It didn’t happen exactly as I planned…which ended up being fabulous. Carly interviewed Ayla weeks later at the South Shore Music Circus in Massachusetts where Ayla was performing with Josh Turner. Carly had not only rehearsed her questions (look out Diane Sawyer!) but she also carried out her interview with perfection and has us laughing hysterically with her question about Simon Powell. The two of them ended up singing “Beat by a Girl” for 2,000 adoring fans and then signing autographs all night long. It was a glorious mentoring moment that none of us will soon forget. 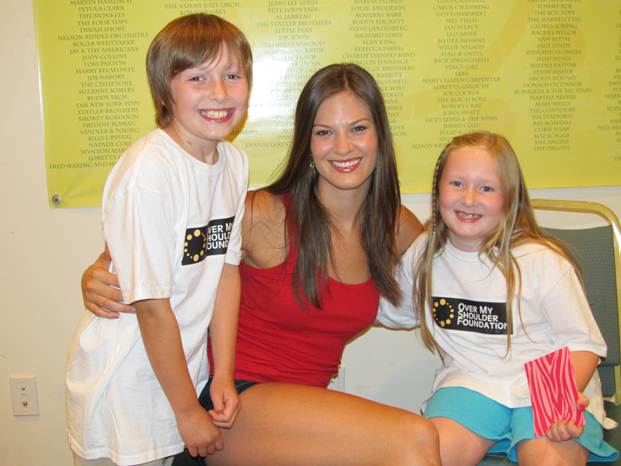 Josh and Carly Ann Connor caught up with Ayla Brown in Cohasset, MA in her dressing room at the South Shore Music Circus prior to her performance with Josh Turner on July 15th, 2012. Carly interviewed Ayla while Josh worked behind the camera and production of the interview. After the interview, Ayla invited Carly to join her onstage that night for her finale of her new hit “Beat by a Girl”. It was a Magical Mentoring Moment.