Jean Stapleton passed away last Friday, May 31. Her time with us lasted for a fulfilling 90 years. We will probably best remember Jean for portraying the role of “Edith Bunker” in the TV show All in the Family.

All in the Family was such a lightning rod for mentoring…

70’s Sitcoms : How They Mentored Us All

Whether we were ready or not, many of the American Sitcom TV shows in the 1970’s served as a wake-up call for how our world was changing.

Through controversial, a sitcom’s comedic structure could tackle the tough conversations of the times on topics like:

Those were just some of the major issues, but there were also many others. The episodes took subject matters that few were willing or capable of talking about and mentored viewers that these subject matters could not remain under the rug or in the closet.

Jean Stapleton as All in the Family‘s Edith Bunker

All in the Family helped issues enter everyday conversations, and those issues needed so desperately to come out. The show is a perfect example of how producers and writers in the 70’s took the complicated, controversial subject matters of that time and mentored viewers towards a more tolerant and compassionate understanding. 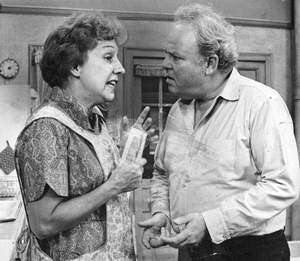 Jean Stapleton was the brilliant actress that brought character Edith from All in the Family to life. Edith was the exquisite example of how simple mentoring can be – even in difficult or awkward situations.

As the wife of bigot Archie Bunker (Actor Carroll O’Connor) Edith mentored him. She navigated and tamed the turbulent, tortured attitude of her husband and quelled his temper with her nurturing ways.

A Beautiful Good-Bye to Jean, from All in the Family Producer Norman Lear

All in the Family became one of the most influential shows in television history. Today we remember Jean and her “Edith” legacy. Perhaps noone can understand better how Jean impacted the world around her than All in the Family producer Norman Lear. We share with you the beautiful words of Norman’s heart-felt goodbye as posted in the New York Times:

When someone as successful and influential as Norman Lear gives such a soaring review of someone’s influence, you know that they can mentor you in some aspect of your life. Now, how can YOU mentor others? How are others mentoring YOU?

Thank You, Jean, for the great work you left us

during the great life you lived.