We often use our Over My Shoulder Foundation blog to recognize mentors that have truly made a positive impact on the lives of others. With this in mind, we would be remiss if we did not mention Bina Kalola, head of strategic investments and global equities at Bank of America Merrill Lynch. Bina was recently awarded the title Mentor of the Year at the Wall Street Women Awards.

Kalola has reached great heights within her organization by embracing the concept of mentoring, prospering from the mentors that she has had throughout her career as well as paying it forward time and time again as a mentor to many along the way. After attending Barnard College, she entered the world of Wall Street in 1990 by way of a summer internship at Shearson Lehman. 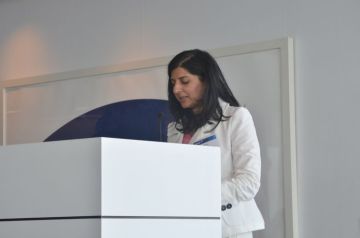 During her time there, fellow Barnard alum, Jodie-Beth Galos, sought her out and taught her the ropes of the financial world. Between discussing more technical analysis and offering the occasional inspirational talk, Galos, a senior with the organization, made a lasting impression on Kalola as a positive role model.

In 1991 Kalola joined Salomon Brothers and was fortunate to have another instrumental mentor, Tom Favia, guide her through the trading powerhouse. What she appreciated most about this relationship with Favia was that he was easily approachable a took the time to really listen to her.

Since then, Kalola herself has served as a mentor through Bank of America’s formal mentorship program and also serves as an informal mentor to many others. As she says, “My door is always open.”

Congratulations to Bina Kalola for earning her well-deserved title of Mentor of the Year! For more mentoring success stories please contact me, Dawn Carroll, at the Over My Shoulder Foundation or share your own!