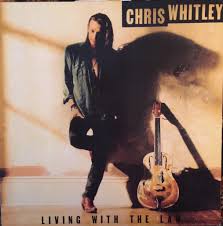 Music has always been my treasure trove of inspiration. Everything I do has a lyrical, musical influence. Once in a great while a magnificent artist emerges who is the perfect trifecta: a brilliant performer, a true-to-life writer, and a talented songwriter. These brilliant creative talents mesmerize us because they have the courage to go where none of us dare. They bear all, give all. These pioneers mentor us with powerful messages that hit like a freight train, and we benefit so much from their hard-hitting, uninhibited, adventurous art.

This first time I heard Chris Whitley I was driving down Sunset Boulevard in Los Angeles. It was late at night in the Spring of 1992. I put his CD, Living with the Law, into the player and immediately I had to pull over. The songs were intoxicating. Each note and word seemed to buzz within me, a force tearing at the fabric of my emotional being.

The songs were profound, and crafted with incredible vision. Chris was no less than a conduit to the emotions of the planet—or at least to my own. Would it be crazy to accuse him of espionage? It felt as if he had raided my heart and soul, and put all of its secrets into one of his songs. To say he channeled my feelings would be arrogant and inaccurate: Chris was too authentic to steal a diary and make its clandestine words his own. His music felt like finding a long-lost friend. It made me want to smile, cry, and fall in love, simultaneously. The melodies and lyrics were alternately overwhelming, comforting, painful, and genuinely satisfying. That night, I was going to see him live in concert.

My friend Mike and I had cut out of work early to make the show—so we had both missed the broadcasts announcing the verdict in the Rodney King trial. That night, Los Angeles burned down around us in a violent frenzy. But, fools that we were, nothing could prevent us from seeing Chris’ concert. Not even the mayhem of a dangerous riot. There we were in the middle of one of the most explosive nights in U.S. history, singing along with Chris on stage, singing at the top of our lungs.

Even with terrible danger all around us, there was no better place to be, and so we continued to belt it out:

Throughout the years, each of Chris’s works offered a different satisfaction. Each new CD studies and interprets the human person, sharing in the blessings—and the hard lessons—of life. Chris never failed to capture the essence of life, how a life is really lived, and how it could deteriorate. Chris was a gifted storyteller who could say so much with so few, carefully chosen, words. Those words drenched in mentoring messages.

On November 20, 2005, Chris took his final breath. On his tenth anniversary I felt compelled to finish this piece, which I began writing 10 years ago in his memory. His ability to break down barriers and highlight our common bonds is what made him a sublime mentor. The world really could use Chris right now.

The last time I saw Chris Whitley was at Club Passim, in Cambridge, Massachusetts. There was no finality in that experience though. I own every CD he ever made. Pandora has a Chris Whitley Station. I just learned about the documentary “Dust Radio,” which I hope captures his high-voltage talent and primitive power. And I just discovered Trixie Whitley, his amazingly talented daughter.

The legacy of Chris Whitely is preserved, in his music and his memory, in his family, and in a new generation of songwriters who seem poised to fall under the spell of this daring, timeless artist.